How to Choose a Car Lift That's Right for You? 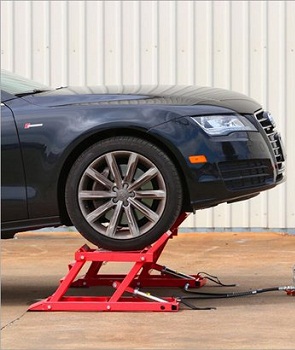 A Jack is a type of mechanical device that is mainly used to lift a heavy item or is used to apply a lot of pressure. It works on Pascal’s Principle. The most well known Jack is the car jack. A car Jack is mainly observed in garages where it is used to lift the heavy car during the time of car wash.

These Jacks are used to lift a vehicle for roadside inspections. This jack resembles a milk bottle hence is named Bottle Jack. It can lift the load to several tons. These jacks are mostly famous in the automobile industry.

In a bottle jack, the shaft is vertical however in a floor jack it is horizontal and fixes to a crank which then slowly lifts the object vertically. This jack has the ability to lift objects to a wide range.

This particular Jack is used for types of machinery where the distance between the ground and the bottom of the vehicle is very small.

Leveling Jacks are mainly used to level trailers and also an RV.

These are the most prominent Hydraulic Jack that works on Pascal’s Principles. These are mainly used in garages and petrol pumps.

Parts of a Car Lift Jack

A car lift jack contains few basic parts. They are as follows:

• Reservoir or Buffer Tank: The vessel which holds the hydraulic fluid is the Buffer Tank.

• Pump with piston or plunger: The pump is the piston pump that is used to accelerate the force of the hydraulic fluid

• Pump level or handle- the handle is used for certain movements that change the position of the ram or the main cylinder.

• Check valve: check valve is the valve through which the hydraulic liquid passes when the handle is moved.

• Main cylinder or ram: This is the cylinder which when pressurized with the fluids and lifts the object upwards.

• Release valve: This valve is included to release the pressure and enable the jack to retract.

Steps to keep in mind while choosing car jack

While choosing a car jack certain points should be kept in mind:

The height of a floor jack is as short as 5 cm hence these small specifications can be taken into account while choosing the suitable hydraulic jack. The maximum height should also be kept into account while keeping in mind the purpose.

The car jack should be picked up safely and should also be handled with great care. Since it is a heavy instrument it should also be used after practicing several times in safe backgrounds.

The best Car Lift in UAE

Gulf automobiles is a trusted company of the UAE and the automobile product tops in Dubai and Saudi Arabia. Being a trusted supplier and certainly the biggest supplier of car lift for garages in UAE we are heading towards a trusted position to our clients.

Thus while choosing a car lift in UAE these steps should be taken care of.